You asked for it - now live with it!  More from Morticia (reprinted with permission from the demented places that pay me)

Melodie Campbell writes funny books. You can buy them at Chapters, Amazon and demented bookstores everywhere. The Bootlegger's Goddaughter is now available.
Posted by Melodie Campbell at 15:48 2 comments:

Morticia's Advice Academy - A Hallowe'en Tradition for the demented reader


More Completely Useless Advice from Morticia,
repeated with permission from the news rag that used to pay me (yes, they actually paid me to write this.)

(With apologies to sane folk everywhere)

Read the National Expirer
…for the best in Graveyard Journalism

Dear Tired,
Sorry honey, but you married him.

Dear Livid,
Belt him.  (Act fast: this relationship is bound to be constricting.)

Confidential to Offended in Oakville: You are absolutely right, and a girl has a right to pick and choose.  I would never agree to try that position with a man I wasn’t married to.  I mean, what would your husband say?
Posted by Melodie Campbell at 07:55 2 comments:

If you like humorous mystery, you'll LOVE Anne R. Allen!

Janet Evanvich, Lisa Lutz, Jana DeLeon - I've been compared to all of them.
But have you met Anne R. Allen?  Her breezy humorous mysteries add another dimension I love - they're sophisticated!  Check out the latest below, and then page down for an interview with one of my favourite writers.  Seriously, Camilla rocks!

The Queen of Staves 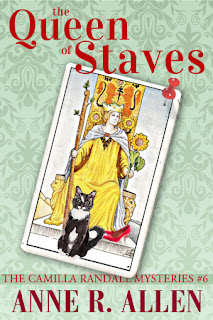 The Camilla Randall Mysteries are a laugh-out-loud mashup of romantic comedy, crime fiction, and satire: Dorothy Parker meets Dorothy L. Sayers. Downwardly mobile bookstore owner and etiquette expert Camilla Randall is a magnet for murder, mayhem and Mr. Wrong. But she always solves the mystery in her quirky, but oh-so-polite way.

Music blogger Ronzo never dreamed that giving an unfavorable online review to the Leftenant Froggenhall band would destroy his life. But he can only escape the band's gruesome persecution and threats to his loved ones by faking his own death and living as a homeless dumpster-diver.

He's forced to hide his blossoming relationship with bookstore owner Camilla Randall to keep her safe from the band's vengeful clutches. Not easy when they're together every day, as Ronzo's unexpected tarot-reading skills keep Camilla's failing Morro Bay shop afloat.


When a mysterious Irish poet shows up dead on a tarot client's beach, it's up to secret lovers Camilla and Ronzo—and the tarot cards—to find the killer. Hopefully before the homicidal Froggenhalls arrive in Morro Bay.  Luckily Buckingham the cat is on the case, ready to fight the bad guys, tooth and claw.

And TheQueen of Staves will be on a 99c Countdown sale in the US and UK beginning tomorrow, October 21, through Wednesday, the 25th

Normally, I'd serve coffee when I have a guest on here.  But with Anne, I'm getting out a bottle of Bolly.  (And if you don't know that reference, you probably aren't a regular reader here!)


1.     What style of mystery novel is your favorite (police procedural, cozy, etc.)?

I especially like Kate Atkinson's Jackson Brodie detective stories. And I'm a big fan of Lisa Lutz's comic Spellman series. Both of those are PI mysteries, but there's a whole lot of other stuff going on. Lisa Lutz is hilarious.

Oh, and then there's a Canadian author named Melodie Campbell…

I'm kind of over the "blueberry muffin cozies" that are so popular now. They're awfully same-y. Ditto the Girl with the Tattoo Gone on the Train ones. I read several and enjoyed the novelty, but now the unreliable narrator thing has sort of passed its sell-by date for me.

When I really need to relax, I often reread the classic English mysteries of Dorothy L. Sayers, Ngaio Marsh, Margery Allingham and of course Agatha Christie.

Give me a sweet little old lady who's doing in all her friends in the garden club any day.

2.     When you start a new mystery, do you plot it all out from the start (all the clues and red herrings) or does the story evolve as you write it?

I start with a general outline and a pretty clear idea of the ending. With several of my novels, I wrote the last scene first. (Of course the scene changed a lot after I'd actually written the books.)

But the outline usually goes out the window and I often surprise myself and discover the murderer wasn't the person I thought it was going to be. Yes, I do a lot of rewriting.

I'm finishing up a book on "Easy Blogging for Busy Authors," but I'm dying to get to the next Camilla mystery. I have a title: Googling Old Boyfriends, and a general idea of the plot and characters. I've got a couple of chapters written, but I haven't had time to really work on it.

4.     What’s the most interesting or unusual research you’ve done for a book you’re writing?
I started researching poisons for So Much for Buckingham, and I got totally caught up in reading about poisonous plants. I found the subject so fascinating I started blogging about poisons. I call the series Poisoning People for Fun and Profit.

The series has been going for almost two years now and I've covered thirty poisons. I plan to turn it into a book when I'm done.

5.     Do you have a favorite character from your books?

The character I identify with most is Plantagenet Smith, the gay screenwriter who once won an Oscar but now "can't get arrested" in Hollywood. He's Camilla's sensible best friend who tries to keep her on an even keel, but he always seems to get blamed for things that aren't his fault.

I'm also fond of all of Camilla's Mr. Wrong boyfriends. The most fun one is Peter Sherwood, who is a charming British career criminal who often fakes his own death to get out of scrapes. He shows up in Camilla's life at odd moments, mostly to cause chaos, but sometimes to play the hero.

6.  Where do you get your ideas for the mysteries in your books?

Mostly they come from my own life, and sometimes from the news. Some incident in my life usually sparks a story. Often somebody I want to kill. I figure it's best I do it in fiction.
So Much for Buckingham came from my real-life experiences being harassed and threatened by the notorious Goodreads bullies. I even used the texts of real rape and death threats they sent and posted to Goodreads. (Which they later denied.)

Ghostwriters in the Sky was inspired by a workshop at a prestigious writer's conference, where the leader lorded it over young writers eager for critiques, often humiliating them horribly. I had fun killing him off.

Sherwood Ltd. was based on my adventures at the UK publishing company that published my first two novels, and the opening scene of The Queen of Staves came from an incident that happened to me when I was working in a bookstore in Morro Bay.

No Place Like Home was inspired by a story I heard on NPR about a New York magazine editor who lost everything to Bernie Madoff, and The Best Revenge was inspired by a nasty interview I read in the NYT where the interviewer was snarky and mean to a clueless young debutante.
*** 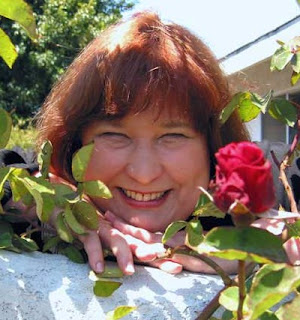