Golf is a Four Letter Word

Golf season always fills me with awe. Not because I immediately become what is euphemistically known as a ‘Golf Widow.”  Nope.  In fact, after recently upping our insurance coverage, the concept of ‘widow’ has taken on a slightly merrier outlook.

But I digress.  My problem with golfers is that they speak an entirely different language.  For instance, take a look at the following words that are associated with golf:

Tee:  This is silly.  Not only is it spelt wrong, but golfers don’t drink tea.  They drink beer.
Club:  The place with the bar that you go to after the game.  Sometimes the object OF the game.
Caddie:  Those big cars in the parking lot that you try not to hit with your golf cart.
Hole:  The thing you fall into and twist an ankle when you’re trying to find your ball in the ‘rough’.
Iron:  What you don’t have to do, because golf clothes are made of plastic.
Putter:  As in ‘putter around the golf course’.
Driver:  The guy who has to forgo the beer after the game.  Hence ‘tee’ above.

But without a doubt, the biggest problem with golf is the way it is scored.  Obviously, the person who hits the ball the most times has done the most work.  But the rules say the person who swings a mere 67 times wins.  That’s hardly trying at all.  This is supposed to be a Scottish game, so I ask you:  Where is the Protestant Work Ethic Here??

There’s only one explanation, and it has to do with the other Scottish religion – the one I apparently married into - saving money.  The fewer times you hit the ball, the longer the ball lasts…

Yup, a serious post from me today.  Pretty well as serious as it gets.

When I was eight, a wasp stung me.  Within minutes, I had fallen asleep, and couldn’t be wakened. My terrified parents rushed me to Emerg, as my heart rate fell and my body went into anaphylactic shock.

What I can tell you is that people who are allergic to venom cannot ‘tough it out.’  They aren’t awake to do so.  And what happens next is often a complete respiratory shutdown.  That means death.

My cousin’s teenaged daughter had a terrible experience when she was a lifeguard.  While she was working, a man in his mid-thirties died in her arms.  He had never been stung before, and thus no one knew he had an allergy.  Such a tragedy haunts you and everyone around you, for years later.

Those people understand the seriousness of a wasp or bee allergy.  Thing is, a lot of people don’t.

Our northern culture is one that worships summer

In Canada, it’s considered outrageous not to enjoy every moment of summer.  Let me go further: it is almost considered a sin.  We are scolded for not being outside as much as possible.  Bookworm?  Get outside!  Don’t be a weakling.

Here’s what it means to be allergic to bee and wasp stings:

I can’t eat outside in bee and wasp season, which is pretty well from May until the first frost in October.

I can’t be outside around people who have food and drinks.

Translated, this means no outside patios at restaurants.  No backyard or corporate BBQs.  No pool parties.  No large events outside where food is being served.  No Wonderlands and CNEs.

In September, it doesn’t matter if food is being served.  I don’t spend much time outside at all during the day, because of the yellow jackets.  Doctors warn me that if you are allergic to bee and wasp stings, you are most likely allergic to spider venom too.  Avoid them. Never touch them. Have someone else remove them.

I can’t go camping.  I can’t travel to third world countries.  My specialist tells me not to be more than twenty minutes from a hospital at any time.

I’ve adapted pretty well to these restrictions.  I carry an epi-pen at all times, which will give me ten minutes.  Enough time to get me to the closest hospital (if I’m awake enough to inject it.  Hopefully someone else will be with me.  I try not to think about that too much.)  It sucks, but better safe than dead.

No, we can’t come to your BBQ.  I’m sorry you decided to have your book launch or wedding outside.  Please enjoy it, but don’t insist that I be there, or make me feel guilty for declining.

Please don’t shame me into taking a risk on my life, so that your plans won’t be upset.

Of all the things I get told, this useless statement angers me the most.   And yet, I can’t count the number of times people have said this to me.   I’ve been stung four times.  On none of those occasions did I deliberately bother the wasp/bee in question beforehand.  I didn’t even know the insect was there.

I’m sure people don’t realize how cavalier this sounds.  They can’t know how little value they are putting on my life, right?  Would you knowingly go to a party where rattlesnakes are commonly found in that patch of grass at this time of year?  Would you say to someone, ‘don’t be silly, they hardly ever strike…’

My allergist said it best: “Tell people, ‘would you be comfortable eating dinner outside with a rattlesnake lying six feet away from you?’  Because that’s the sort of danger we’re talking about here.”

Thank you for reading this!  You may save someone’s life.

On the other hand, you may come up with a really neat plot idea for a murder mystery.  Remember to credit me in the acknowledgements.

Posted by Melodie Campbell at 17:30 9 comments:

My Novel is a Mess (again...repeat...one year later)

(Most of the words are the same.  But here I am, a year later, working on book number thirteen.  And just like eleven was at this time last year, my book is a mess.  Which just goes to show that the blog post written below is dead on the mark.)

Yes, I’m at that point.  Writing to a specific word count, three-quarters written, and my eleventh novel is an unqualified mess.

If you are a veteran writer like me, you say it’s not going to happen this time.  But it does. EVERY FREAKING TIME.

The Linear Approach:
This time, you are going to write linear, by gawd.  One chapter after another, in mathematical order, until you reach the end.  Each chapter will have an outline.

But here’s the problem with that.  You signed a contract that specifies a pretty exact word count.  Is your story going to magically end at the precise word count you need?

Damn straight, it’s not.  It’s going to meander along, minding its own business, taking little side trips, refusing to stay on course.

Because, of course, outlines are just that.  They’re a guide.  You don’t know whether the story is really going to pull together with sufficient motivation and all the goodies until you actually write the thing.  And here’s what happens mid-writing:

You need a new character to make the plot work.  You just thought of a fab new subplot.  Orlando doesn’t work as a side-setting.  You need to move it to Phoenix, and that means a whole lot of changes…

And before you know it, you’re scribbling on the outline, adding this, subtracting that, and then it happens.  Your book is a mess.

I write comedy, and comedy is finicky.  Those good lines come when they come, and you have to get them down fast.  Sometimes they’ll present themselves to me when I’m in a restaurant.  Sometimes, when I’m already in bed.  (Yes, I keep a pen and paper on my bedside table. Ditto, by the loo.)

I always have an outline.  But when writing a highly comedic book, you have to write those funny scenes when you are inspired.  This means hopping around the timeline, writing the scene that works for you today, thinking of another great line, hopping back to an old scene to insert it, when you should be moving forward.

Which brings you to this point: the important scenes are written, and they present themselves like completed sections of a jigsaw puzzle.  You need to put them together.  Find the pieces that are missing and write the bits to connect them.

Because Sister, your novel is a mess.

That’s the point I’m at now.  The comedy is there.  The conflicts are in place.  The climax is written.  Now I need to take that kaleidoscope and move those pieces into the pattern that works best.

How to cope?  I think the best thing you can do is accept that this is going to happen.  Unless you are a robotic automaton lacking inspiration, you are going to veer from the plan more than once.

At some point, every novel you write is going to be a mess.

My advice: just accept it.  And understand that part of your role as writer is that of clean-up artist.

That’s where I stand today, staring at a story that looks like a tornado just ran through it.

Time for the cleanup crew.

Posted by Melodie Campbell at 07:06 4 comments: 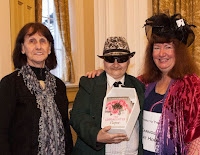 Posted by Melodie Campbell at 06:11 No comments: