The Arthur Ellis Awards Gala will be virtual this year, alas.
Otherwise I would be sitting with Marissa Stapley, Samantha Haywood, Kevin Donovan and Brenna English-Loeb at the dinner, sharing a bottle of bubbly!  Great company to be in. 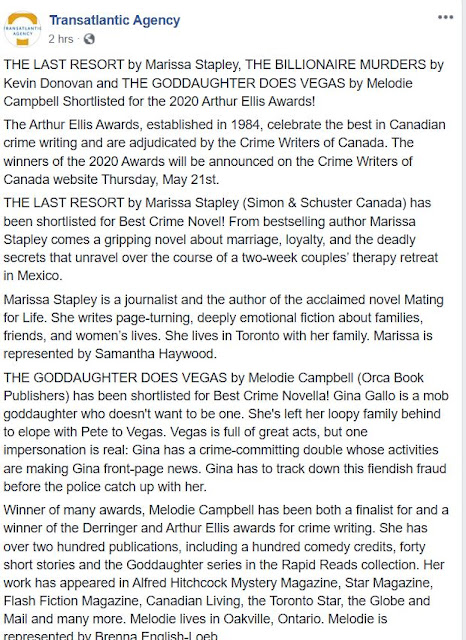 Posted by Melodie Campbell at 19:23 No comments:

On Sleuthsayers today with the following post, repeated here for my regular followers...


by Melodie Campbell
When I say rocked, I don't mean 'rock on'!  Nope, I mean rocked to the core.

Since mid-March, we've been in close to lockdown here in the True North.  That has given me time to revisit old favourties and be utterly shocked by the revelations therein.

When I was a young girl in the seventies, I graduated from Nancy Drew, to Agatha Christie, and then to the masters of romantic suspense, Victoria Holt, Daphne DuMaurier and my particular favourite, Mary Stewart.

Of course I did.  The hormones were running high, and the choice of males in my classroom left a lot to be desired.  I yearned for big romance.  But I wasn't happy with romance genre books and found them boring.  This gal wanted high adventure rather than sweet attraction.  So suspense, it was.

At that young age, I didn't even know what type of man I would want in my life.  Surely not Heathcliff.  Not Mr. Darcy.  Those heroes did not reach me.  Far too brooding and sulky.

Then I read My Brother Michael.  Holy Heartbeat, Batman!  There, I found the man of my dreams and the heroine I wished to become.

Most men of my age know Mary Stewart from her brilliant King Arthur and Merlin novels, The Crystal Cave and The Hollow Hills.  Wonderful books.  But I'm speaking of her romantic suspense novels in this column today.

Simply put, they were revolutionary.

Readers, did you know this?  A quiet revolution was happening in fiction, and Mary Stewart was at the epicentre of it.

In the 70s, I couldn't have put my finger on it.  Now, with decades and experience later, it's absolutely clear to me why she was my favourite.

Why?  Her heroines.  These women were educated and had careers.  They were veterinarians, Latin teachers, Shakespearean actors.  They traveled solo to foreign places!

But with adventure comes mishap.  For years, I had read books and seen movies where women waited to be rescued.  Even The Princess Bride, a movie loved by so many, had a princess who relied on others to rescue her.

I wanted a princess who would pick up the sword herself.  (Even more, ditch the princess.  I wanted her to be Queen.)

Mary Stewart's protagonists had courage and resourcefulness.  They fought back when threatened.  They risked their lives rescuing large animals (This Rough Magic) and even men (The Moonspinners.)  This was not only unusual for the time - it was absolutely groundbreaking.

Second reason I fell in love with the stories of Mary Stewart:  her heroes.

These were the men I wanted in my life.  Some may find this hard to believe (stop laughing) but I have been told I am a strong woman.  I was the sort of gal who was told by profs at university that I "didn't know my place."

In Stewart's books, I found the ideal man for a strong woman.  Her heroes were my kinda guys.  Well-educated, but when things go bad, they don't walk away from a fight.  There was a primitive edge there, a peel back of civilization when the chips are down.

In Airs Above the Ground, the male lead forces the hand of the villain down on a red hot stove burner while saying, "It was this hand, I believe?"  (The hand that had previously hit the hero's wife.)

I cannot begin to tell you how sexy that is.

In My Brother Michael, the heroine is fighting hard but losing.  Her lover arrives just in time to kill a
powerful Greek criminal with his own hands in a to-the-death fight; he breaks the fiend's neck.  Of course, said male lead also happens to be a classics scholar...but hey, in the UK, classics scholars can have commando training.  An unbeatable combination of brains and brawn.


Stewart was magic for a young miss trying to be more than society expected her to.  She was magic to an aspiring writer yearning for adventures.  But more than that, she was revolutionary.

"I think all female crime-fighters of today owe a huge debt to Stewart.  She was one of the first writers of popular fiction to portray women who were not helpless and hysterical in a crisis."

Think about that, you superhero and comic book heroines who kick butt!  All you female private investigators in fiction today!  And give a bow to Mary Stewart, who bravely gave us those role models over fifty years ago.

How about you?  Any other authors you would also salute?

Melodie Campbell was hardly ever a mob goddaughter, at least not recently, but she writes about one.  THE GODDAUGHTER DOES VEGAS has been shortlisted for the 2020 Arthur Ellis Award 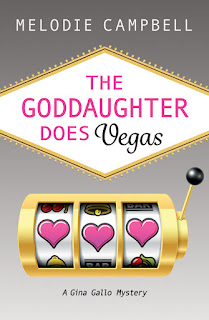 for Excellence in Crime Writing (Crime Writers of Canada.)  You can find The Goddaughter series at all the usual suspects.

Melodie Campbell
Winner of the Derringer and Arthur Ellis Awards
"Impossible not to laugh." Library Journal review of THE GODDAUGHTER

THE GODDAUGHTER DOES VEGAS shortlisted for THE ARTHUR! Crime Writers of Canada

Thrilled that Gina and Nico are shortlisted for the 2020 Arthur Ellis Award!  Thanks, Alison, for the heads up! 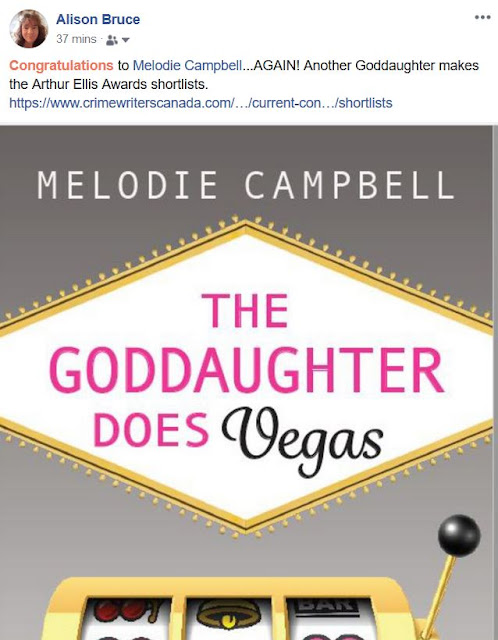 Posted by Melodie Campbell at 17:25 2 comments:

A litle standup - (or lie down, ahem)

Chanelling my stand-up days, with a little humour: