Interview with the Tenured and Talented Melodie Campbell! (okay, at least part of that is true...)

My honour to be on Lisa de Nikolits' Blog today! As expected, Lisa asks the teaser questions that one can't hide from (says the gal who was hardly ever a mob goddaughter, at least not recently)

Here's a teaser from it:
Tell us something really interesting that's happened to you!
In 1993, I had a wacky comedy play produced in Toronto. A producer was in the audience, and he said to me after, “You are completely nuts. How would you like to come to LA and write pilots for us?” I sadly said no, because I had two pre-schoolers and a husband – how could I move them to the US. Besides…it was 1993. Who had ever heard of this outfit called HBO??

This has to be the worst mistake ever made by someone not legally insane.
Posted by Melodie Campbell at 09:39 No comments:

Sometimes you have to say goodbye to beloved things in a move.  My piano has a new home with some lovely people.  It also has a history that might interest people popping on here:


History of the Vose Piano

In 1980, I was a singer with the Toronto Gaelic Singers, and our conductor was with the Canadian Opera Company.  She and I were good friends, and she heard of a sale of used grand pianos that was open to members of the professional music community in Toronto.

There had been a recession in the US, particularly in the auto industry states.  An enterprising man with connections to the opera company had gone down to Detroit with a transport, and brought back seventeen pianos.

I had only been married two years, but I longed for a piano.  I was not only a singer; I had done twelve years of piano lessons and also played the violin.  As it turned out, I had a bit of extra money because I worked for Bell Canada, and the operators had been on strike.  As management, I had to do massive overtime on the ‘boards’ as we called it.  My job was the night shift, now 911.  My husband (who died in 2019) was a wonderful man who agreed that I should take the overtime money and buy a piano. 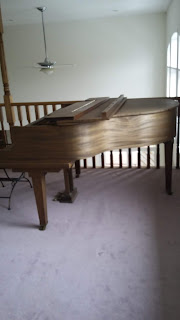 My friend got me in the sale, and we had a piano technician with us.  There were seventeen pianos in the old Toronto house where they were being stored.  The technician checked every one, and then told me to buy this one.  I had fallen in love with a pretty white painted one, and he shook his head firmly and said this piano was by far the best one in the place.  “Did I want a pretty piano, or a great piano?” I remember him saying.  I felt duly scolded.

He told me this was a Vose, from Boston – a well-known company that produced excellent instruments.  This particular piano had come from a hotel in Detroit that had gone bankrupt.  It had been used in a bar, by a singer accompanied by a pianist.  Before the piano was refinished (in 1985) you could see drink rings on the lid.

I paid $2100 for the piano, which was a lot of money at the time.  (It was the most expensive piano in the shipment.)  Our research since then told us that the piano was manufactured around 1923.  If you look at the legs, you will see it is definitely in the style of Art Deco.

I played it for years, and my two daughters took lessons.  Ten years ago, I developed arthritis, so haven’t been able to play it much.

It’s been well-loved for nearly 100 years, and I’m delighted to have it go to its next good home.