THE BLOODY WORDS CONFERENCE SCHEDULE! Where to find me...

Here's where to find me:

For your convenience, the entire schedule is posted below.  See you there!

2 p.m. – 9 p.m. Registration. The registration/information desk is on the east side of the escalators.
6:30 p.m. – 10 p.m. Agent/editor appointments (you’ll be given your appointment time a week or two before the conference)

8:30 a.m. – 6 p.m. Registration. The registration/information desk is on the east side of the escalators.


Scene of the Crime room


Posted by Melodie Campbell at 05:26 No comments:

BIGGEST AUTHOR THRILL YET: to find your photo under Stephen King's in MYSTERY SCENE MAGAZINE

Many thanks to MYSTERY SCENE MAGAZINE
for putting my photo on the same award page as Stephen King's!
Mine was for The Goddaughter's Revenge winning the Derringer.
Stephen's was for being shortlisted for the Thriller Awards. 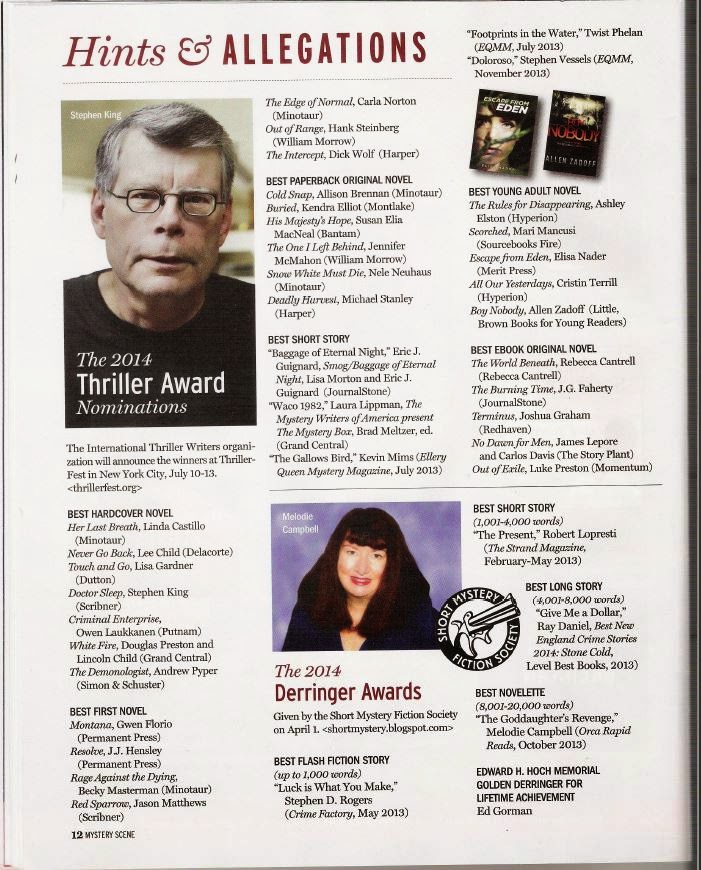 Posted by Melodie Campbell at 06:03 No comments:

Sushi For Two - and Pass the Matzo

When it comes to trying different types of food, I'm not really adventurous.  I kind of like to know what I'm eating.  Where it came from.  What it's been doing all its life.  So when Wil said he was taking me to a Japanese restaurant to celebrate my birthday, I was skeptical.

Of course, I've been to Japanese restaurants before.  You know the sort.  The chef (who really isn't a chef - he's a contortionist from the Tokyo Circus) stands in the centre of the table (which really isn't a table - it's a grill, isn't it?  Those clever Japanese) where he juggles footlong salt and pepper mills while cutting your meat into tiny pieces with really sharp knives and practicing the latest kung fu moves from Saturday morning television.

You, on the other hand, spend your time ducking salt and avoiding becoming the target of the knife throwing show by smiling a lot and drinking copious amounts of rocket fuel sake.  With luck and perserverance, you topple off your bar stool just in time.

Unfortunately, this wasn't that sort of place.  Nope, this was the sort of place where you get to meet your meal before you eat it.  It might even swim out to your plate.

Will grinned.  "Look, the place is filled with Japanese people.  The food must be great!"

Now, I have to admit, I've never quite seen the logic of that line.  So Japanese people are in the place.  And that makes it good?  What if they've all been BRIBED to be there?  What if it's a family concern (a BIG family) and Uncle Phil will go broke if they don't eat there?  What if it's the only place they can understand what people are saying?

Granted, it would be a little disorienting to walk into a Japanese resto and find it filled with - say - Germans speaking Urdu.  Sort of like going to an Italian Trattoria and being served by someone called Weinbaum.  "So...you want Matzo with your fettucini?  No? What, are you sick?  Hey Goldie!  Bring somma dat chicken soup over here."

We were led to a very dark corner and asked politely to sit on the floor.  Then we were given soup to eat with chopsticks.  Have you ever tried to eat soup with chopsticks?  Now I know why Japanese people are so slim.

"What's this?"  I said, spearing a little springy white glump with the chopstick.

"And what have they put with it?" I said gamely.

Will leaned over.  "Looks like fish eyes.  But don't worry.  They're cooked."

Maybe that's why they use chopsticks.  Maybe they don't WANT to eat it.
Posted by Melodie Campbell at 08:20 2 comments: