I HATE THAT (in which Terry Ambrose gives us a new look at schnitzel. Sort of.)


Okay, so I've corrupted his premise somewhat.  But what's a little corruption between friends?  Today I'm delighted to invite Terry Ambrose to the Bad Girl blog, and he rose to the challenge of wacky.  Who says you can't be literary and lunatic at the same time?  Take THAT <sic>
(over to Terry...who is also offering a free book!  Check it out below)

I've learned to hate "that". Not as in, I hate something, but as in, "the word." It all started while I was working on an anthology of Hawaiian mysteries to benefit literacy. Our project editor made comments on my story and noted how much editors hated the word "that." Pfft. Big deal, right?


Shortly thereafter, my wife and in-house editor Kathy, began marking all instances when I used—the word. Jeez, I used it a lot. So, I put myself on a diet. No more—well, you know. There are times when we can't avoid saying it, but other times we're just using verbal shorthand to make life easier.


What's a writer to do? Sometimes, no amount of rewriting will do. So, what about a substitute? Do you remember the 1984 Saturday Night Live skit with Billy Crystal and Christopher Guest as Willie and Frankie? They're talking about all those painful things they hate, but instead of his now-famous line, Willie says, "I hate it when schnitzel happens."


Somehow, I don't think the Willie and Frankie scene would have turned into quite the comedy icon it did with a word substitution. Yet, we writers continue to strive for new turns of a phrase. Depending upon their genre, some writers make substitutions to avoid cursing.


Let's conjure up a protagonist who is a reporter/amateur sleuth. Her last story turned into a political hot potato after she exposed the mayor's son as a Peeping Tom who dons women's underwear on his adventures. Our hero's job is on the line after the scandal her story caused. Enter her editor—who is renowned for his flaming expletives. He strides in with another story, throws down the assignment, and says, "You're gone if you schnitzel this one up!"


Yes, schnitzel is a useful word. Just not as helpful as the real deal. So, let's be clear. I am on a schnitzel diet, but still use the word when necessary. And you can take that to the bank. Sorry, everyone, I schnitzeled up.


Terry Ambrose is a San Diego writer of the Trouble in Paradise (McKenna Mystery) series, and the License to Lie thriller series. Terry has been nominated for multiple awards and won the 2014 San Diego Book Awards for Best Action/Thriller.
Terry’s novels receive consistent praise from readers for their complex characters and plots. Kirkus Reviews said Terry’s writing has “. . . the kind of snark that will remind readers of Elmore Leonard.” 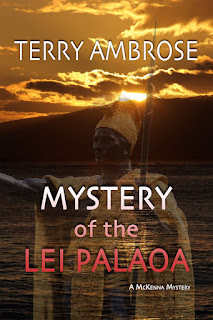 A precious necklace…an arrogant stranger…an unsolvable murder…
McKenna and his PI-wannabe tenant, Chance Logan, investigate the death of a Honolulu troublemaker and discover dead men tell no lies, but the living certainly do. Can they crack a case with no clues, no evidence, and no witnesses?
Free download links:
Amazon link: http://www.amazon.com/dp/B019L0PB30
B&N link: http://www.barnesandnoble.com/w/mystery-of-the-lei-palaoa-terry-ambrose/1123166975?ean=2940152532746
Posted by Melodie Campbell at 19:31 11 comments: