Today, 14 professional writers with blogs have gotten together to write the same post “Why I Became a Writer.” Please stop by any or all of their blogs to comment and find out what drives us in our favorite obsession.

Why did I become a Mystery Writer?  It’s the Maze.

A horrible crime occurs.  Murder most foul.  The police are stumped, and it looks like the criminal will get away with it.  Then along comes an amateur detective who follows a set of clues, and with supreme logic, solves the mystery.  Justice is served.

I want to say I write mysteries and suspense because of a deep-seeded need to see justice done in the world.  I really want to say that.  But it’s not true.

I love to read and write mysteries because they are clever.  They invite me to use my brain.  Who is the killer?  Can I come to the same conclusion as the detective, at the same time, following the same trail of clues?

Traditional mystery novels are like a chess game.  In writing the novel A Purse to Die For, I discovered that mysteries must be plotted carefully, strategically.  It is a convention of mystery writing that the reader receives the information at the same time as the detective.  Anything else is considered cheating. Clues must lead to the solving of the crime.  The reader must be able to go back and see the trail, once he/she has finished reading the ending.  But the ending can’t be too obvious – that’s no fun.  So it’s the clever mix of laying several trails like those of a maze that intrigues me as both a writer and reader.  The trick: only one leads to the fateful conclusion.

A good mystery with a bang-up ending – logical, but original – gives me a kick like no other book.  I marvel at the cleverness of the author.  In short mystery fiction, I devour that twist at the end.  In my own fiction, you can count on an unexpected ending.

I love the wonderful delight that comes from stumping the reader…in making them say “Ah! Didn’t see that coming.”  I’ve given them a challenge, and hopefully at the end, a smile.  There is no greater high.

Melodie Campbell is the author of 40 short stories and three novels, including the classic Agatha Christie-style mystery A Purse to Die For, co-authored with Cynthia St-Pierre.  She has won 6 awards for short fiction, and was a finalist for both the 2012 Derringer Awards and the Arthur Ellis Awards.
www.melodiecampbell.com
www.funnygirlmelodie.blogspot.com

A PURSE TO DIE FOR
The victim wore haute couture…
When fashionista and television celeb Gina Monroe goes home to attend the funeral of her late grandmother, the last thing she expects to encounter is murder.  Who is the dead woman in the woods behind the family home?  And why is she dressed in Milano designer clothes?

“Fast, funny, furious. A great read and proof once again that Canadian crimewriters are among the best in the world.”  Janet Kellough, author of Sowing Poison
Ebook and paperback available on Amazon.com, Amazon.ca, Amazon.uk and European Amazon sites.

THE ONE-LINERS....from my comedy days

As most people who read this blog know, I got my start writing comedy.  This involved writing longer monologues for newspapers and stand-up, and short one-liners (actually, most of them are three-liners...did you ever notice?  Who picks these terms?)

By popular request (thanks, kids!) here is a post of my favourite one-liners (and two, and three...Nobody expects the Spanish Inquisition).  As in all comedy, delivery is important.  So imagine the great Phyllis Diller delivering these lines, in that deliciously low, crusty voice.

I had the flu once.  It was horrible.  I couldn't eat a thing for three hours.


I tried one of those expensive anti-aging creams recently.  It worked.  I broke out all over and looked about fourteen
.

About my recent passport photo. Seriously? I harbor this secret fantasy that border guards are going to take one look at my passport and say, "Hey!  This isn't you!  Take her away."'


Back in the day I used to be a beach babe.  Over the years, my body has morphed into 'beach ball,' and is now on it's way to 'beached whale.'


What is is about guys in cars?  Why do they all turn into demonic Richard Pettys?  Hands clenching the wheel in a death grip, ready to smash the gas peddle through the floor JUST IN CASE the guy in the next car manages to pull away from the light one second ahead?
Women don't behave in ridiculous ways like this.  We're much too busy shopping for things we don't need.


Recent studies show that approximately 40% of writers are manic-depressive. The rest of us just drink.

Posted by Melodie Campbell at 05:54 2 comments:

Giving Thanks to two Grandfathers Today

To the Grandfather I never knew...the one who was busted down twice from corporal for insubordination at Ypres and Vimy...the one they say I am most like:
Thank you.

To my other Grandfather...the Italian one who served in the Canadian Army in WW1, a new immigrant to Canada and immediately sent back to war-ravaged Europe:
Thank you.

Both died as a result of lung damage from mustard gas, years later.

Both are remembered with love and reverence, today and always.

Posted by Melodie Campbell at 06:12 No comments:

Many thanks to the 75+ people who came out to the launch of THE GODDAUGHTER mob caper, at the Hamilton Library!

It was truly a pleasure to present the Hamilton Literacy Council with a cheque for $425 from the proceeds of book sales at the event.

My personal thanks to Gareth Bond, Chair of the Literacy Council, for Emceeing the night with such panache, and to Cathy Astolfo and Alison Bruce for conducting the author 'roast' (I think....author is still smarting from some of the questions).

Thanks also to Orca Books for donating a class set of THE GODDAUGHTER to the Hamilton Literacy Council.

THE GODDAUGHTER is available in Chapters/Indigo stores, independent booksellers, Barnes and Noble, and online at Chapters/Indigo, Kobo, Amazon and other retailers. 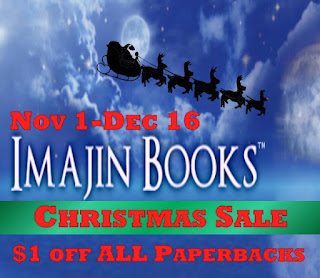 Click here to get $1 off A PURSE TO DIE FOR
and ROWENA THROUGH THE WALL!
www.imajinbooks.com/sale

Posted by Melodie Campbell at 06:38 No comments: