Why Book Tours are Expensive (one of Bad Girl's fave columns - true, too)

I’ve recently been on a book tour for my crime comedy, The Goddaughter’s Revenge (winner of the 2014 Derringer. There. I got it in.  I can relax now.)

Book tours are expensive.  You travel around to independent book stores and you sell some books and sign them.  It’s fun.  You meet a lot of great people.  But it’s expensive.  And I’m not talking about the hotel bill and the bar tab.

I write about a mob Goddaughter. So I know a bit about mob assassins.  It may come in handy.

By now I had tested various body parts.  Knees were numb.  Hands, scraped.  Chin, a little sore.
But here’s the thing.  I hit in this order: knees, tummy, boobs, palms.  My tummy and boobs cushioned the fall and saved my face.

Posted by Melodie Campbell at 14:14 No comments: 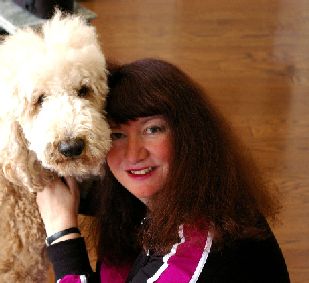 
You can reach Melodie through her website right here.  Or better still, buy her comedy novels in Chapters, Barnes&Noble, Walmart or Amazon.
Posted by Melodie Campbell at 07:09 3 comments:

It isn't every day your book gets reviewed in the foremost mystery magazine in the world. 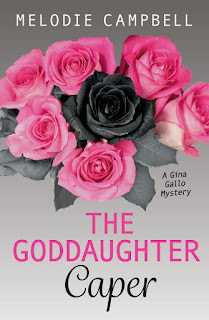 Many thanks to Ellery Queen Mystery Magazine, The Jury Box, for this wonderful review in the Dec. issue!

Melodie Campbell, The Goddaughter Caper, Raven Books, $9.95.
Gina Gallo tries to steer clear of her family's questionable business dealings. But when she discovers the body of a local Peeping Tom in the alley behind her shop, fate forces her hand. She and various cousins find themselves in a topsy-turvy mess of missing bodies, a surplus of coffins, and geriatric misbehavior. Campbell's writing is always funny. The Goddaughter series, of which this slender novella is the fourth volume, is part of Orca Books' Rapid Reads imprint, making it a fast, fun read.

On AMAZON
Also available at bookstores in Canada and the US.
Posted by Melodie Campbell at 16:31 2 comments: