A special welcome to my guest, James DiBenedetto, author of Dream Student

What would you do if you could see other people's dreams? If you could watch their hidden fantasies and uncover their deepest, darkest secrets...without them ever knowing?
Sara Barnes is about to find out. She thought that all she had to worry about was final exams, Christmas shopping and deciding whether she likes the cute freshman in the next dorm who's got a crush on her.
But when she starts seeing dreams that aren't hers, she learns more than she ever wanted to know about her friends, her classmates...and a strange, terrifying man whose dreams could get Sara killed.
"Dream Student" is the thrilling first installment of the Dreams series. 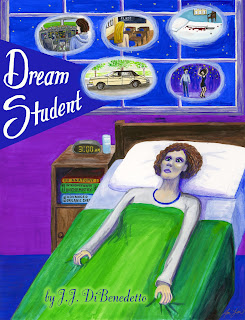 I have to admit, it feels very strange to be drinking wine, like an actual adult, with my parents.  When I’m at school, obviously, I don’t have these thoughts.  I’m twenty one years old.  I’m in charge of my life, making real, important choices.  I’m working hard, making serious progress on as adult a goal as I can think of.  I’m in a real, serious relationship with a man I love.  Then of course there are the damned nightmares, and the fact that I’m still even close to being in one piece after several weeks of them qualifies me as a functioning grown-up for sure.

Still, something happens to me when I come home from school, even now, even though rationally I should know better.  It’s not that Mom and Dad do anything, really, to make me feel that way – it’s pretty much all in my head.

I realize that partly it’s just the fact of sleeping in the same bed I’ve slept in since I was in kindergarten, and looking at the picture of Kermit the Frog that’s been on my wall since 1977 or so as I fall asleep.  Everywhere I look in my bedroom there’s a reminder of my childhood.  Especially the poor ratty, dog-chewed stuffed rabbit that’s sitting on my bed right now.  Good old Mister Pennington.

But right now, my father is looking at me very differently.  He’s been ever since lunch and I just now realized that’s why.  I guess he was right, when he said I’m slow on the uptake.  What it is, is he’s seeing me as really and truly an adult for the first time.  Well, if he thinks I am, I certainly ought to be able to believe it myself.

I get more proof when we get home.  Mom and Dad don’t know it, but I learned years ago, when the conditions are just right and the heating vents in their room and my room are both open but the heat isn’t actually blowing in either room, I can hear them quite clearly.

What I hear tonight, as they’re getting ready for bed, is Dad telling Mom about his day with me.

Then he tells her that he’s thinking about putting off the big kitchen renovation they’ve been planning for the last year.  He wants to save the money for something much more important that he thinks might be coming a lot sooner than he expected.

I don’t know what to say to that.

I’m willing to bet that Mom and I have exactly the same expression on our faces right now, and that we both just went precisely the same shade of white.  I don’t know how I keep from fainting at the shock of hearing those words.

There’s only one reasonable thing to do then.  I jump out of bed and over to the thermostat, crank the heat as high as it will go and with the blast of hot air out of the vent, the voices of my parents are gone.  I lay back down on my bed, grab Mister Pennington to me in a death grip, and try to put my father’s crazy words out of my mind and fall asleep.

Two hours later I’m still clutching Mister Pennington, and Lumpy is snoring at the foot of the bed.  I’m finally just now drifting off to sleep.  The last thing that goes through my mind before I’m out is that, maybe, my father’s crazy words might not be quite so crazy after all.


Bio:
J.J. (James) DiBenedetto was born in Yonkers, New York. He attended Case Western Reserve University, where as his classmates can attest, he was a complete nerd. Very little has changed since then.
He currently lives in Arlington, Virginia with his beautiful wife and their cat (who has thoroughly trained them both). When he's not writing, James works in the direct marketing field, enjoys the opera, photography and the New York Giants, among other interests.
The "Dreams" series is James' first published work. 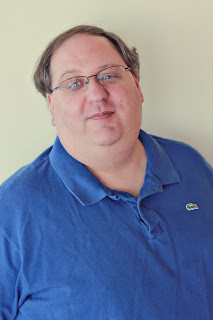 Links:
www.amazon.com/author/jjdibenedetto (amazon author page)
http://www.amazon.com/Dream-Student-Dreams-book-ebook/dp/B00BW3FPF4/ref=tmm_kin_title_0?ie=UTF8&qid=1370129540&sr=1-1 (direct link to buy book #1 on Kindle)
www.writingdreams.net (my website)
https://www.facebook.com/pages/The-Dream-Series/107699179403603 (book series page on FB)
http://www.facebook.com/james.dibenedetto.39 (my personal page on FB)
http://writingdreams.net/?p=451 (direct link on my website for a 10 minute sample of the audiobook)
---
Read about my writing: www.writingdreams.net
Buy my books: amazon.com or smashwords
Posted by Melodie Campbell at 17:58