FREE to a good home! Two books of Paranormal Romance! 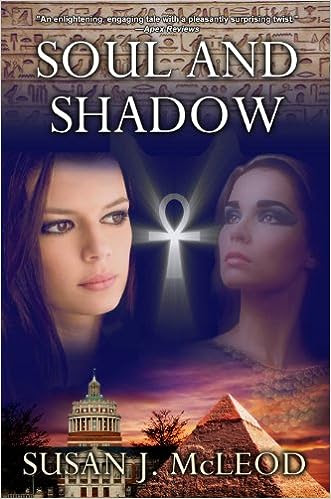 In ancient Egypt, a young priestess of the goddess Hathor is laid to rest in a beautiful tomb with everything she needs for her journey into the afterlife…

Three thousand years later, archaeologist Ursula Allingham discovers the mummy of Amisihathor and is confronted by a mystery. Is the man buried with the priestess really her husband? Or was she actually in love with a scribe called Kamenwati and separated from him in life as well as death?

To answer these questions, Dame Ursula turns to Egyptology student and artist Lily Evans, who reluctantly agrees to help. Lily learns that she is psychically linked to Amisihathor andexperiences a strange, unsettling phenomenon—the memories and emotions of the Egyptian woman. Luckily, Lily has her beloved pet Cleocatra and her irrepressible friend Katy to keep her grounded in reality. Or so she hopes.

Dealing with the challenges of falling in love with Ursula’s grandson Kent, the reappearance of her ex-fiance Stephen and the demands of her mother and her boss Professor Briggs, Lily soon realizes she has taken on much more than she bargained for.

ROWENA THROUGH THE WALL!

“Is that a broadsword on your belt, or are you just glad to see me?”
When Rowena falls through her classroom wall into a medieval world, she doesn't count on being kidnapped - not once, but twice, dammit. Unwanted husbands keep piling up; not only that, she has eighteen year old Kendra to look out for and a war to prevent.
Good thing she can go back through the wall when she needs to...or can she? 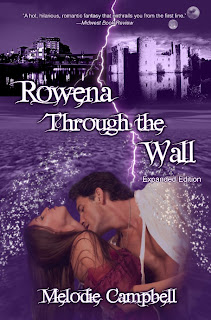 About the Author:
The Toronto Sun called her Canada’s “Queen of Comedy.”  Library Journal compared her to Janet Evanovich. Melodie Campbell has over 40 short story publications, 9 novels and 10 awards.  Rowena Through the Wall was an Amazon Top 100 Bestseller, putting her ahead of both Nora Roberts and Diana Gabaldon for a magical time.

The entire Land’s End Trilogy was a top 50 Amazon bestseller in January 2015!  You can read more of Rowena’s adventures in Rowena and the Dark Lord, and Rowena and the Viking Warlord.

Posted by Melodie Campbell at 01:00