"Laugh-a-minute with some truly side splitting humour" - Brit reviewer Helen Beaufort on THE GODDAUGHTER!

Occasionally, one gets a review that just Rocks! 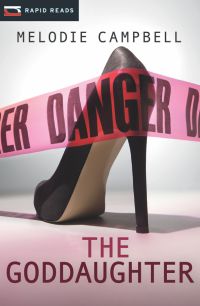 Helen Beaufort lives in London, England, and I have no idea how she found me.  But she did, and I am delighted.

My Crafting a Novel students at Sheridan College will be studying this as an example of 'how to do it.'  Thorough, and thoroughly entertaining.  There are clips in here so catchy, they are going in my promotion file.

Thank you, Helen. YOU Rock!

A Review of The Goddaughter: Gina Gallo #1
by Helen Beaufort
Part one of The Goddaughter series (Gina Gallo: #1) seems to have readers talking for all of the right reasons. Combining clever comedy, thrilling suspense and fast paced narrative in this tale of the misadventures of the title character, Melodie Campbell really has crafted a novel which can be enjoyed in it's own right as well as setting up the coming novels in the series beautifully. Marketed as a 'rapid read' at a fleeting 136 pages, this laugh-a-minute book is a great way to spend an afternoon and could make a perfect Christmas gift for the bookworm in your life this year. Here are my thoughts.

The story
You can choose your friends but not your family, right? Gina Gallo knows this only too well. Gina has tried to distance herself from her mob family in Hamilton and concentrate on her career as a gemmologist but when you are the 'Goddaughter' trouble seems to track you down and saying no to your Godfather Uncle is no easy task. Gina finds this out for herself when her cousin is whacked and she finds herself drafted in to transport some priceless gems in her killer heels (?!) with her unsuspecting love interest Pete in tow – some way to spend a first date! But when the gems are stolen the unwitting pair find themselves embroiled in an epic road trip across the country to steal the stolen stones back before Uncle Vince finds out and dishes out some mob style retribution. Expect comedy and calamity from this modern day Bonnie and Clyde as they deal with debauched politicians, armed robbery, angry mobsters, dead bodies and shoe fetishists...and that's just for starters.

The characters
In short stories and novellas it can be hard to form attachments to the characters and sometimes it can feel like the story is just too short for character any real development to build successfully. In The Goddaughter this wasn't the case. There is enough detail for the reader to learn about the characters without becoming to bogged down by their respective 'baggage' but still come to care about them and become enthralled in their journey. It's hard not to like Gina who is clearly moral and hardworking yet still loyal to her family and willing to break the rules if necessary. Pete is a genuinely good guy who knows about Gina's background and still wants to help her and has great sex appeal to boot. Best of all, both characters are witty and fun. Some of my favorite scenes include those where Gina's family are quizzing (aka threatening) poor Pete in the humorous, if slightly clichéd, way that you'd expect a mob family to react to a daughter's new date.

The writing
Melodie Campbell's writing style really is outstanding. With her unique brand of wit and humor she has crafted an incredibly well written novel that is fast paced, packed full of action with a touch of romance and plenty of suspense. Add a hefty dollop of hilarity into the mix and you're onto a winner – to cram all of this into a mere 136 pages in a massive achievement for this Canadian writer. Her writing style is short, snappy and straight to the point. The plot is very tight and the action never lets up. But best of all her humor encompasses everything from the subtle to the absurd and then back to knowing, familiar humor that will have readers resonating and nodding their heads in recognition. She even manages to cleverly draw in characters from her other books while elusively trying to persuage the reader to buy more of her work. From some authors this could appear arrogant but Campbell has a knack of writing in a humble, almost self deprecating tone which is as endearing as it is entertaining.

In conclusion
I really enjoyed this novella. It doesn't take itself too seriously but is entertaining from start to finish. It literally was laugh-a-minute with some truly side splitting humor that I wasn't expecting from a jewel heist novel. I can imagine that many readers will plough through this novella in one sitting because the action is constant and the narrative fast paced so there never seems like a good moment to put it down and as a rapid read, why would you need to? A really great read and I'm excited to see what's to come in part 2 of the series.

The Goddaughter is available in Chapters, Indigo, Barnes & Noble, Walmart, Zehrs, and online retailers.
On Amazon
(Sale price of 2.59!)
Posted by Melodie Campbell at 05:24