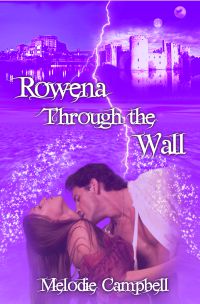 "A hot, hilarious romantic fantasy that enthralls you from the first line.  If you enjoy Diana Gabaldon's Outlander series, you'll adore Rowena and her riotous romps in an alternate world..."
Midwest Book Review


If you like Alternate World Fantasy with a bit of heat, don't miss
ROWENA THROUGH THE WALL,
coming out June 2011, from Imajin books.  Details coming soon...

When Rowena falls through her classroom wall and lands in an alternate world, she doesn't count on being kidnapped - not once, but twice, dammit - and the stakes get higher as the men get hotter.  Unwanted husbands keep piling up, bu that doesn't stop her from falling for the wrong brother.  Not only that, she has eighteen year old Kendra to look out for, and a war to prevent.  Good thing she has the ability to go back through the wall.  Or does she?
Posted by Melodie Campbell at 06:51